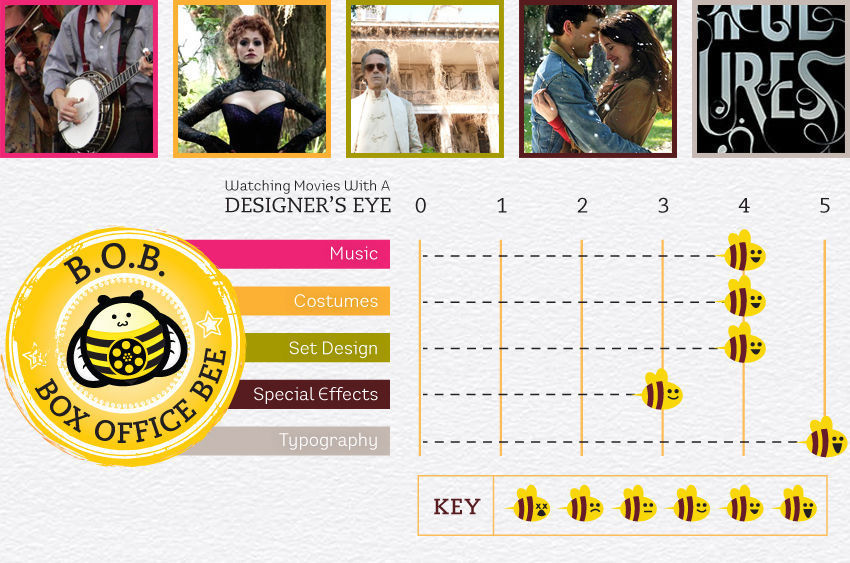 This week’s first post is focused on the film, Beautiful Creatures; a supernatural love story about a boy looking to escape his small-town, Southern life, and a mysterious new girl who arrives at his school. Instead of focusing on the overall plot and cinematography of the movie, this review will examine the artistry and art direction of the film, focusing on music, costumes, set design, special effects, and typography.

Music
The soundtrack of the film is quite varied but effective in expressing the different moods and situations throughout the movie. The songs range from classical atmospheric ballads to country and folk with a modern twist. The composer utilizes classical string instruments to effectively give certain parts of the movie an eerie feel. And of course, the use of the banjo ties in with the setting and environment quite well.

Costumes
Many of the characters’ attire are appropriate for the film, with “normal people” in jeans, T-shirts and skirts, etc. Though the shift in costuming is seen with Lena, the female protagonist, and her family, who are all casters (witches), who wear more formal attire, such as suits and ties and fancy gowns. The casters are portrayed as beautiful creatures and not your stereotypical gnarly witch. The costumes were beautiful and almost over-the-top, but didn’t detract from the movie; it almost gave an old-time Southern feel, which in that respect worked fairly well.

Set Design
I’m not entirely sure where the film was shot, though the environment, buildings and flora were very believable in giving you the impression that the story is taking place somewhere in the South, with neoclassical architectural buildings covered with moss and old, twisted trees that seem to date back to the colonial times. The set design gets my approval too.

Special Effects
The special effects weren’t great, but it was neither awful. From the occasional changing of eye color to a spinning table at a family dinner, the effects seemed satisfactory, nothing over the top. Maybe with a larger budget, the effects can be more polished but it was successful in what it had to do for the film.

Typography
The typography for the Beautiful Creatures identity is beautiful, with an ornate and organic feel. The logo is reminiscent of tree branches, which is a theme throughout the movie. It also has a feminine quality, which plays on the image of the strong female characters seen throughout the movie. There is a sequence at the end of the movie that is worth seeing from a designer’s standpoint, where the type looks as though it is sprouting vines and branches, which is visually compelling.

Overall, Beautiful Creatures gets a Honey “Approved” stamp for its art direction, which I found to be pretty solid. It can be refined a little but overall effective and successful.

If you are looking for a full review of Beautiful Creatures, along with other various films that are currently playing (A Good Day to Die Hard, Safe Haven), you can read more on Tony Sheppard’s popular reviews at Sacramento Press!