Typically, my favorite way to land on a bottle of wine is to walk into the grocery store, walk up to someone who knows a thousand times more than me, hold up my basket of food I’m buying and say, “I have $15 for a bottle—what am I drinking?”

It’s foolproof: if I bring home something great, I’m a hero of humility that knows how to trust an expert; if it’s not great, it’s not my fault. Lately my wife and I have been making tons of pizza, so more often than not I hold up a basket of mozzarella and crushed tomatoes and for a slick $15 the wine rep hands me a bottle of Chianti.

Here’s the thing. I have an interesting relationship with Chianti. It all comes to a head in the bottles we opened up in the office the other day. My bucket list has a lot to do with things that I want to make one day: wooden canoes, beer, there’s something about fermenting pickles in a gourd on there (what?), and one of them is making my own Chianti. A few years back I took a trip with my girlfriend, now wife, to upstate New York to visit her grandmother in Auburn, NY and they were showing me around her grandfather’s basement. We were leafing through old things he worked and tinkered on (he was a crafty, salt-of-the-earth, tobacco-pipe-smoking, built-the-house-that-the-basement-was-under kind of guy) and amongst old farmers almanacs and garden tools we found a bunch of bottles with “Chianti From The Brewer Cellar” (his last name was brewer) and I immediately wanted to grow my own Chianti grapes.

Took a while for me to understand that there’s no such thing as a Chianti “grape,” but that it’s a place in Italy and the wine they make is generally made up of Sangiovese grapes. I’m still going to call it Chianti.

So, back to the grocery store. I hate to say this; but the last five times I’ve walked in, held up my mozzarella and tomatoes (sometimes pepperoni if we’re feeling fancy) and walked out with a bottle of Chianti, it’s been hot garbage. It’s always had this weird taste like what I thought wine probably tasted like when I was younger and generally left me bummed that I didn’t pick up a bottle of Beaujolais.

I felt like I was getting played. “Chianti is the perfect food wine,” they told me, “Its acidity and balance are the only thing that levels well with the acidity and fat on a pizza,” said the internet. Liars. It was a hateful, vinegary mess that demanded your attention, nothing about it was “balanced.”

I wasn’t excited to open the three bottles we had in the wine fridge—I was worried I’d get no detailed notes or interesting flavors. I was prepared to write something even longer than the past few paragraphs to fill this post up and feel like these posts aren’t the veiled attempt to get everyone in the office to hang out and drink a few bottles that I know them to be. 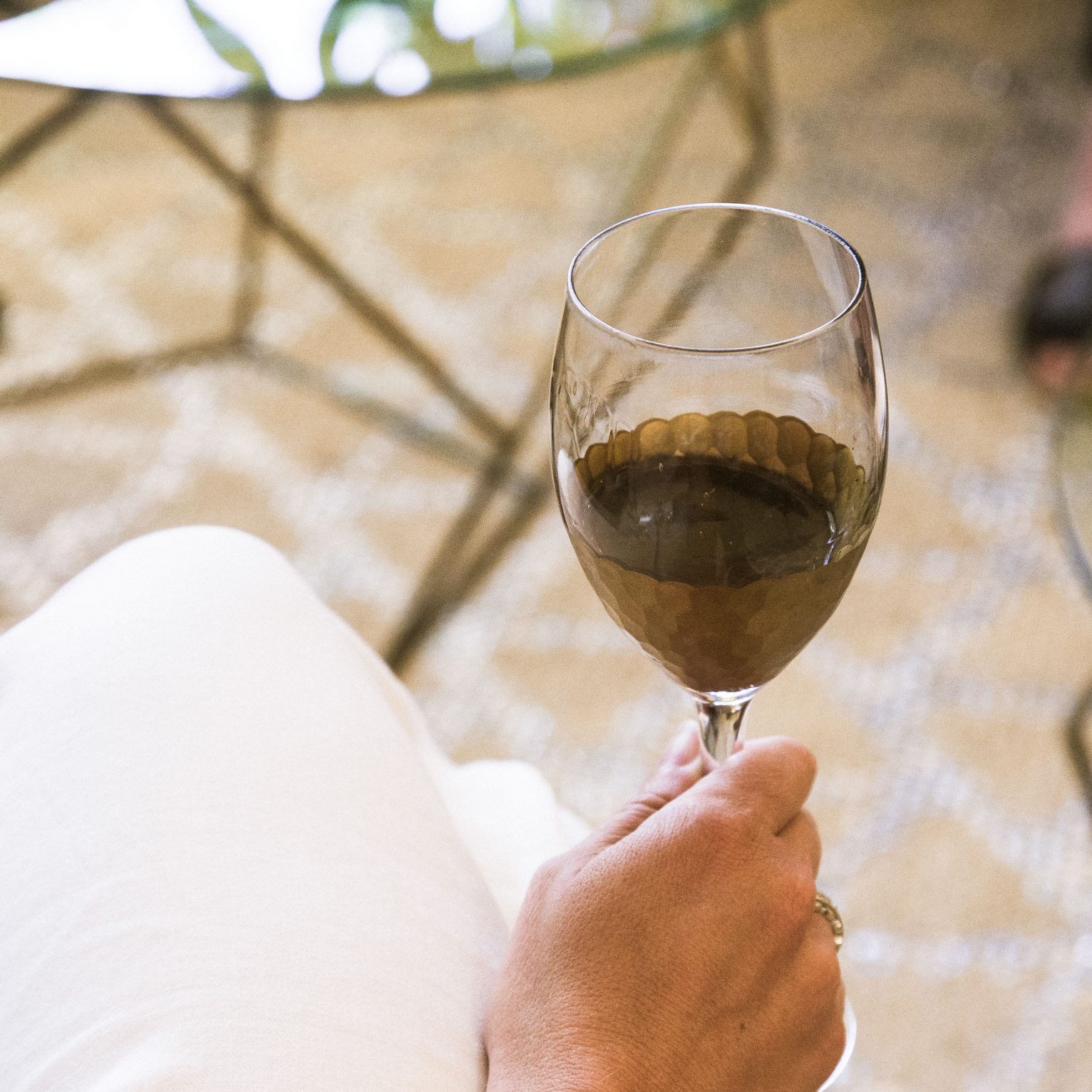 Chianti, Italians, and the art of breaking rules

First: a primer. Chianti is an Italian wine — specifically in Northern Tuscany, and it’s a red wine blend that mainly features Sangiovese1 grapes. If you haven’t tried Chianti, you’ve definitely seen a bottle of it in a traditional “fiasco,” which is a perfectly ironic word in plain-english for what Chianti was 40-50 years ago.

Italy had always grown wine with an attitude that focused on quantity over quality, which was great for a commodity good and the price-conscious, but didn’t really elevate the region or the grape. Eventually (mid 1800’s), a handful of blights decimated vineyards across Europe and left ruined Italian vineyards that would eventually be replanted with high-yield varieties. Sometime after the Second World War, this positioned Chianti to fill the bellies of a burgeoning market struck by economic depression obsessed with quantity over quality. As a result Chianti gained a reputation of being a low-quality utilitarian workhorse—eventually the rules around the DOC (Denominazione di Origine Controllata [Denomination of Controlled Origin] — rules on how to make a specific wine, guaranteed for quality) prioritized making more, cost-friendly wine.

This left Chianti (and Sangiovese in the states) no real standing against nuanced, focused French wines while the wine market was becoming interested in craft and terroir. There might’ve been a more welcome palette to the Sangiovese grape coming out of California wineries, but after the `76 Judgement of Paris where a few California wines beat out French wines in their own categories, winemakers started ripping up Italian vines and leaned into the homogenized monsters derived from traditional French grapes and techniques. So, no sangio’ palette to speak of.

Luckily there were a bunch of Italian rebels. Instead of following the strict (but safe) DOC regulations set by the Italian government, a handful of Chianti producers broke out of the traditional mold and started making what they wanted to make, and the market really liked it. They started moving away from the “recipe” required by DOC and made wines that blended in some of the Cabernet and Merlot featured in the french Bordeaux’s, calling them “Super Tuscans,” eventually eating DOC Chianti’s lunch. The Italian government let up some of the stricter regulations and Chianti turned a corner.

Just going to slip this in here: some friends are good friends, and those are the friends you give a key to your house. Others—the great friends—show up to your house with that key and leave a loaf of bread on your counter. Andrew Hopper is the latter. You’ll see bread speckled throughout the pictures here, he “just happened to be making” some naturally-leavened sprouted Khorasan sourdough with carrot. When I told him I’d use it for a Chianti tasting in the office, he threw in some home-made whipped cultured butter with sea salt, because Andrew is incredible. 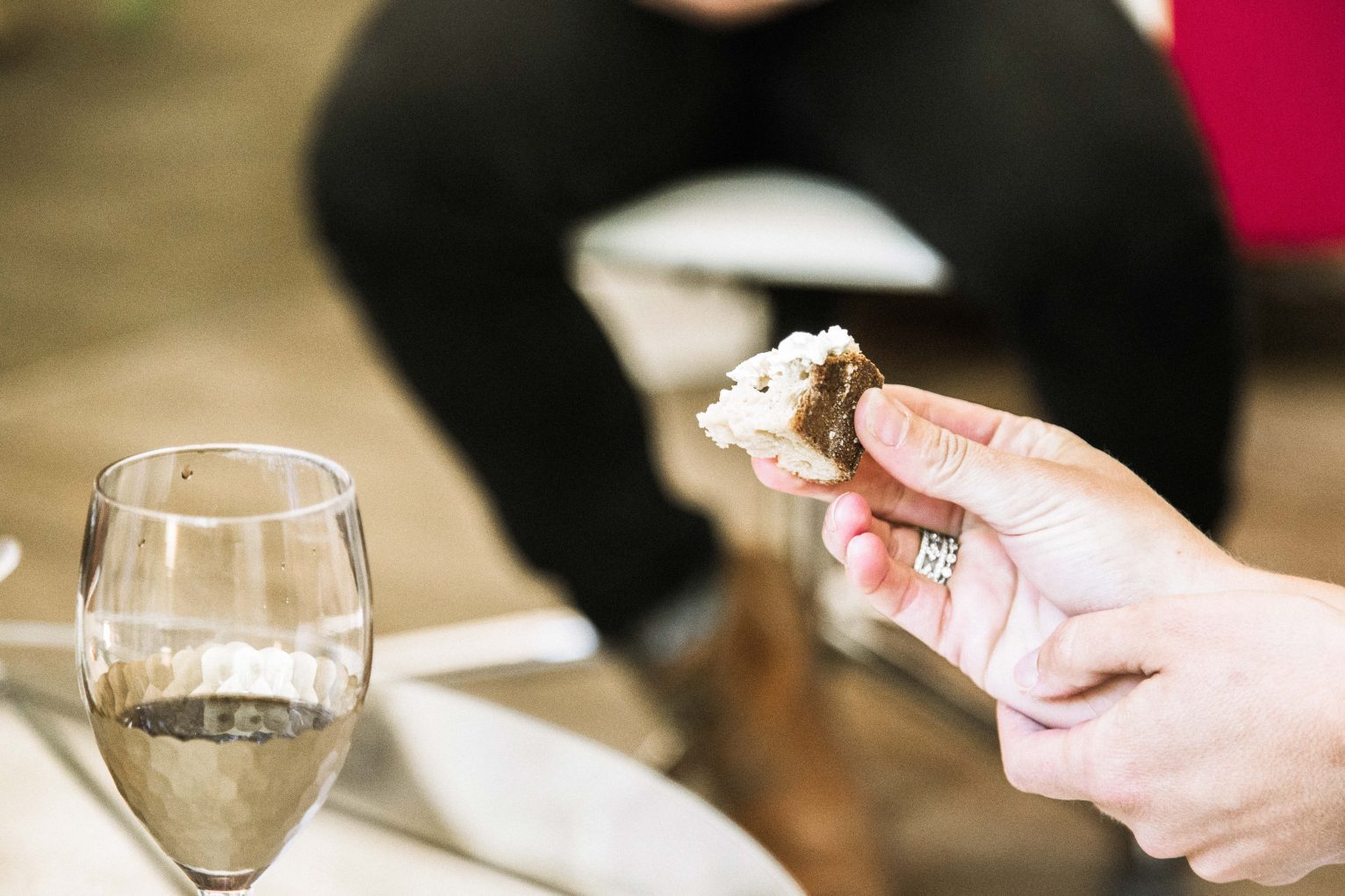 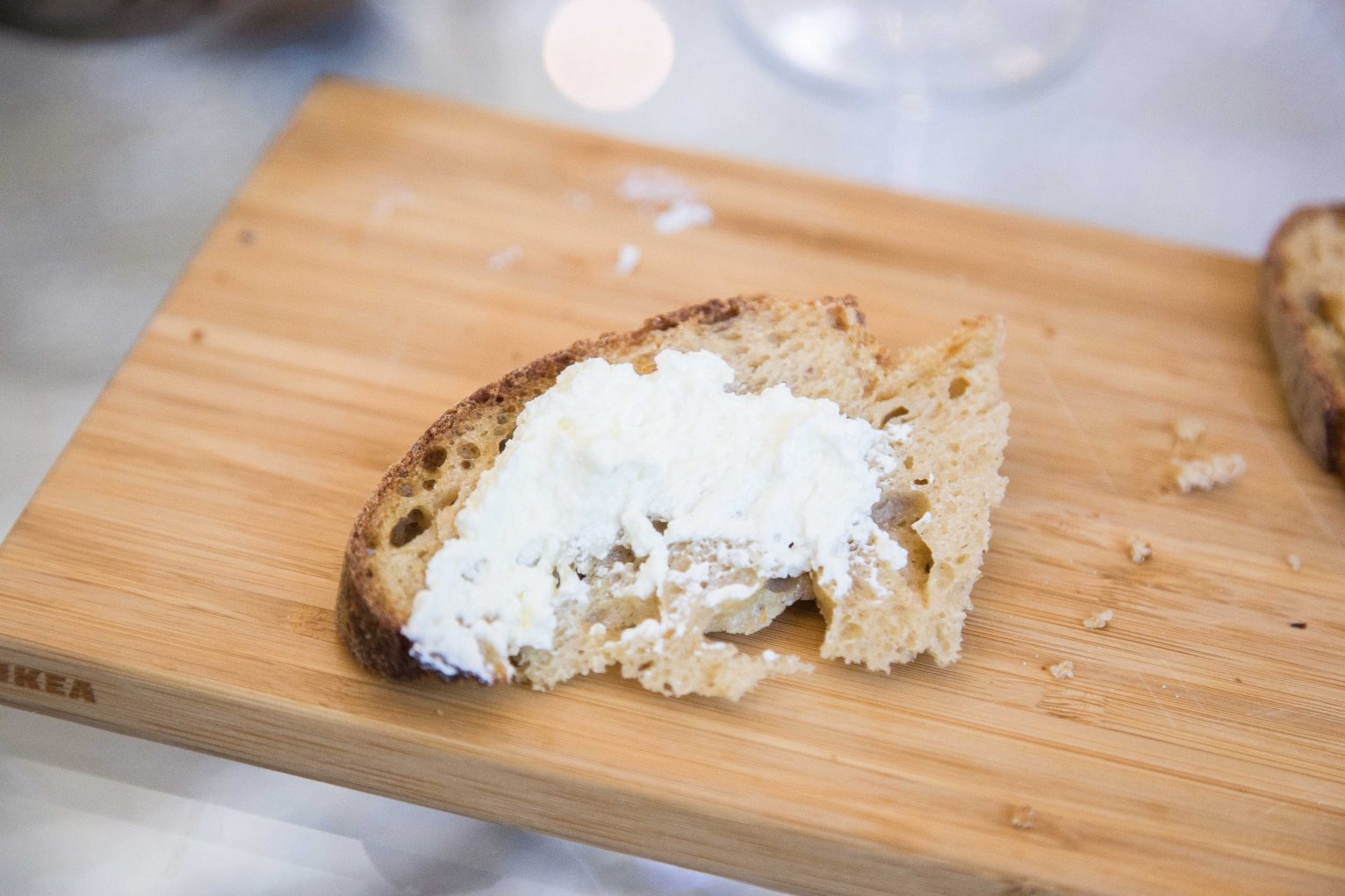 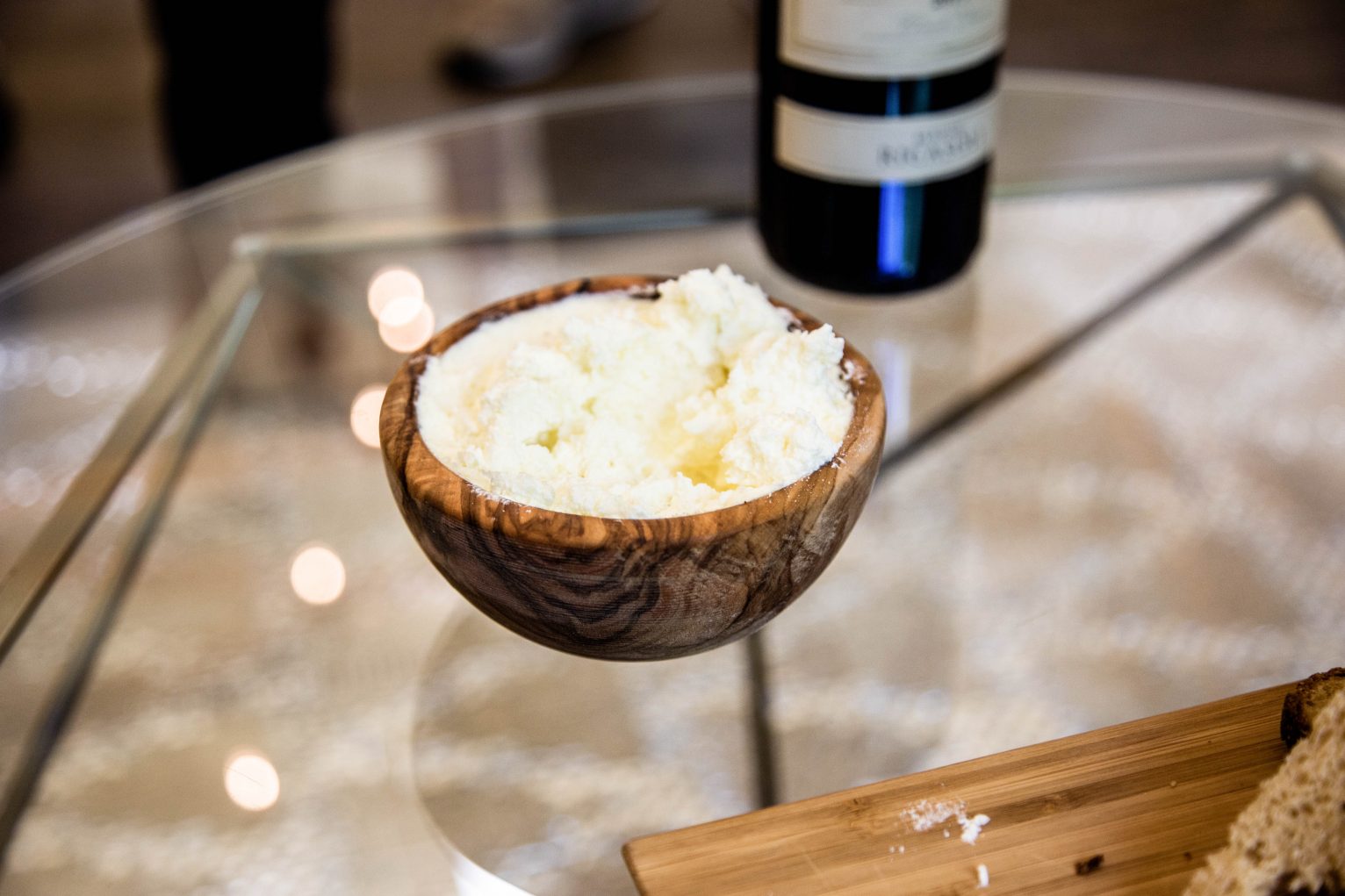 We had four wines in all — one DOC Chianti, two DOCG Chiantis, and one Sierra foothills Sangiovese (Meghan’s. homemade. wine. from. 2004.). DOCG stands for “Denominazione di Origine Controllata e Garantita“ and is supposed to be a “guarantee” of quality. They set it up because too many people were getting wines through DOC, but it sounds a lot like the same problem happens with DOCG. There’s a lot of controversy over who gets the certification and why—but it breaks down to neither being directly correlated to a “great wine,” but it does mean that they stick to a standard. A certified organic apple is organic, doesn’t mean it’s the best apple you’ve had in your life; they’re certifications not guarantees. Alright, the wines. 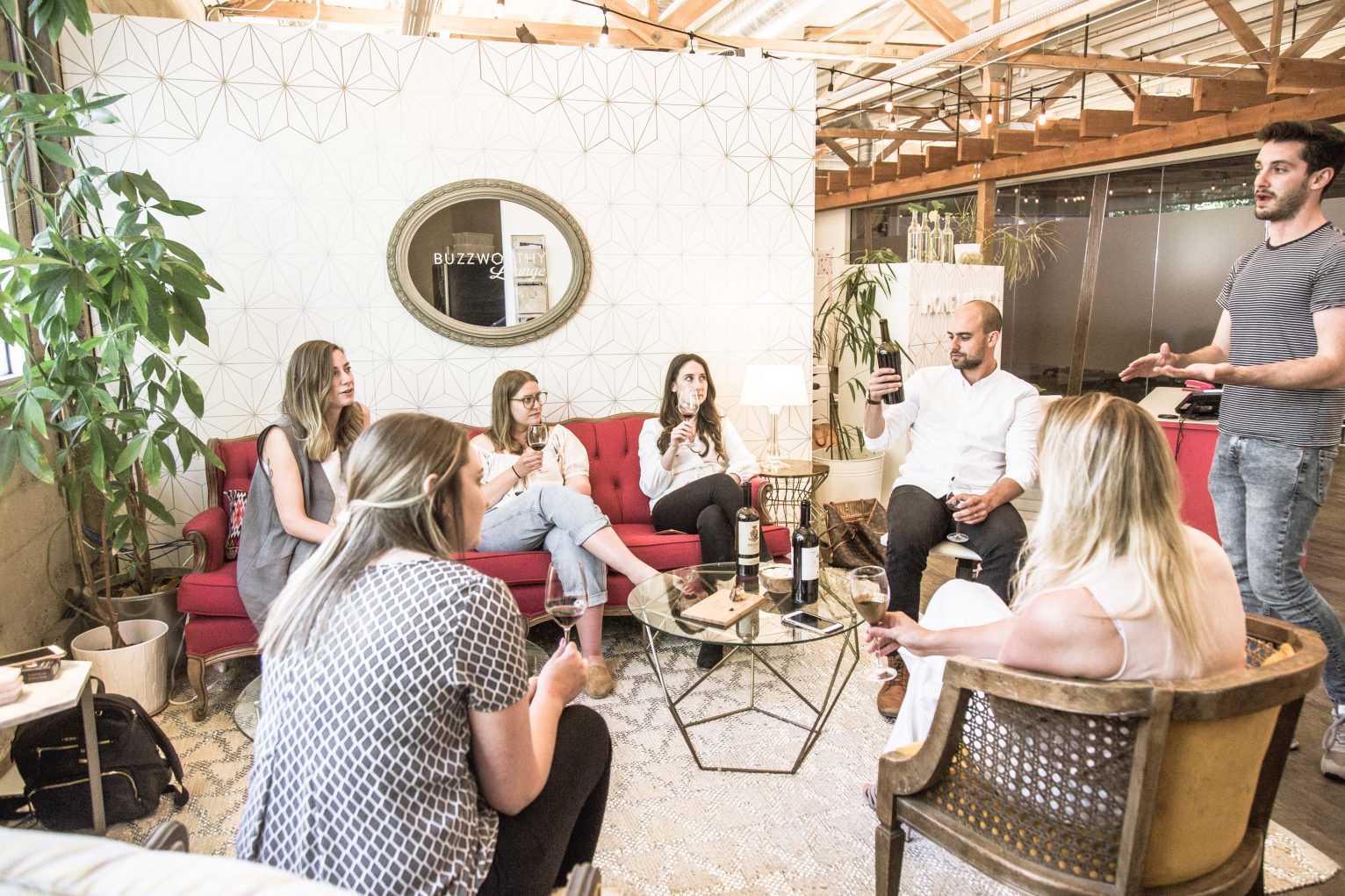 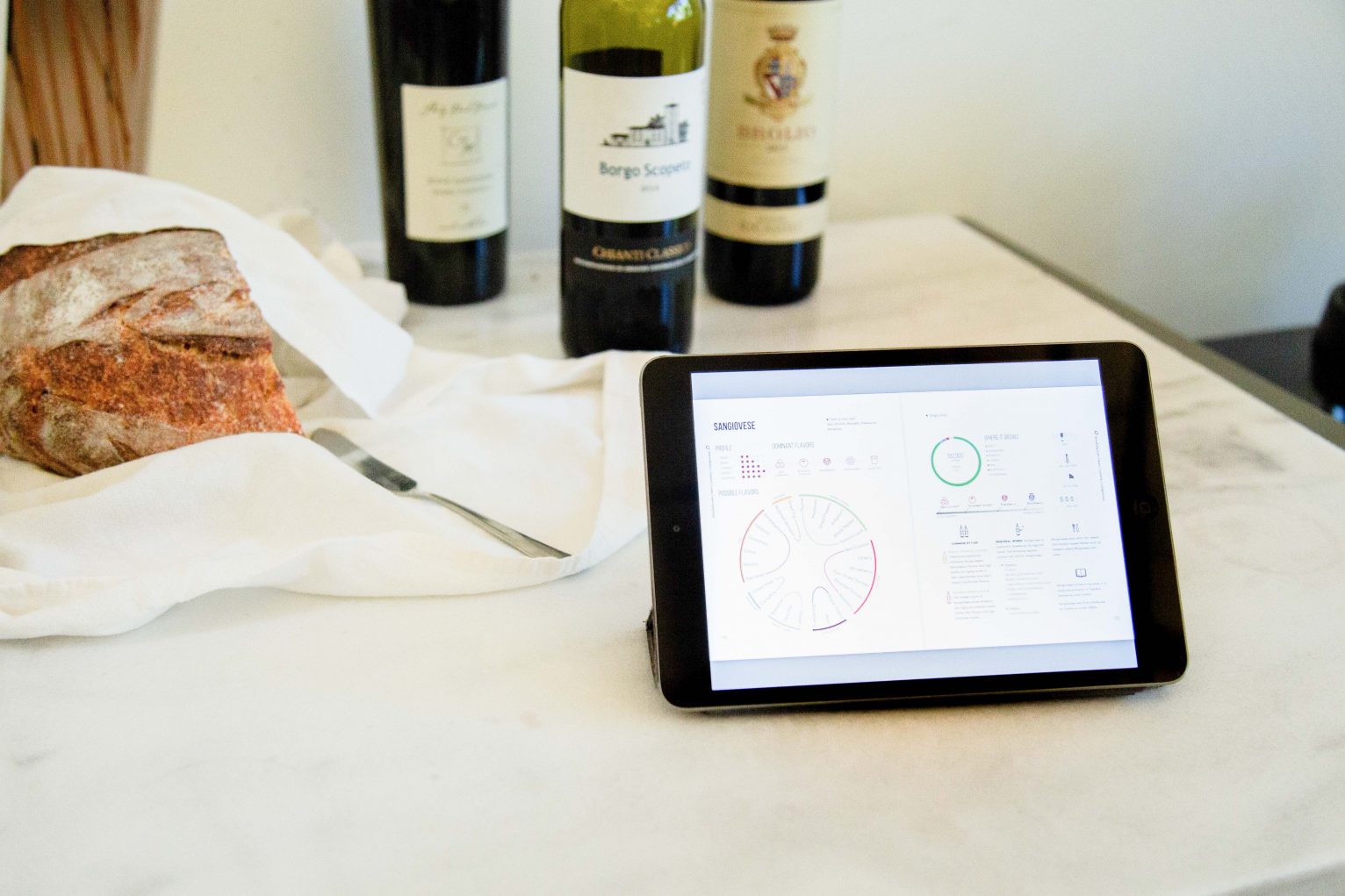 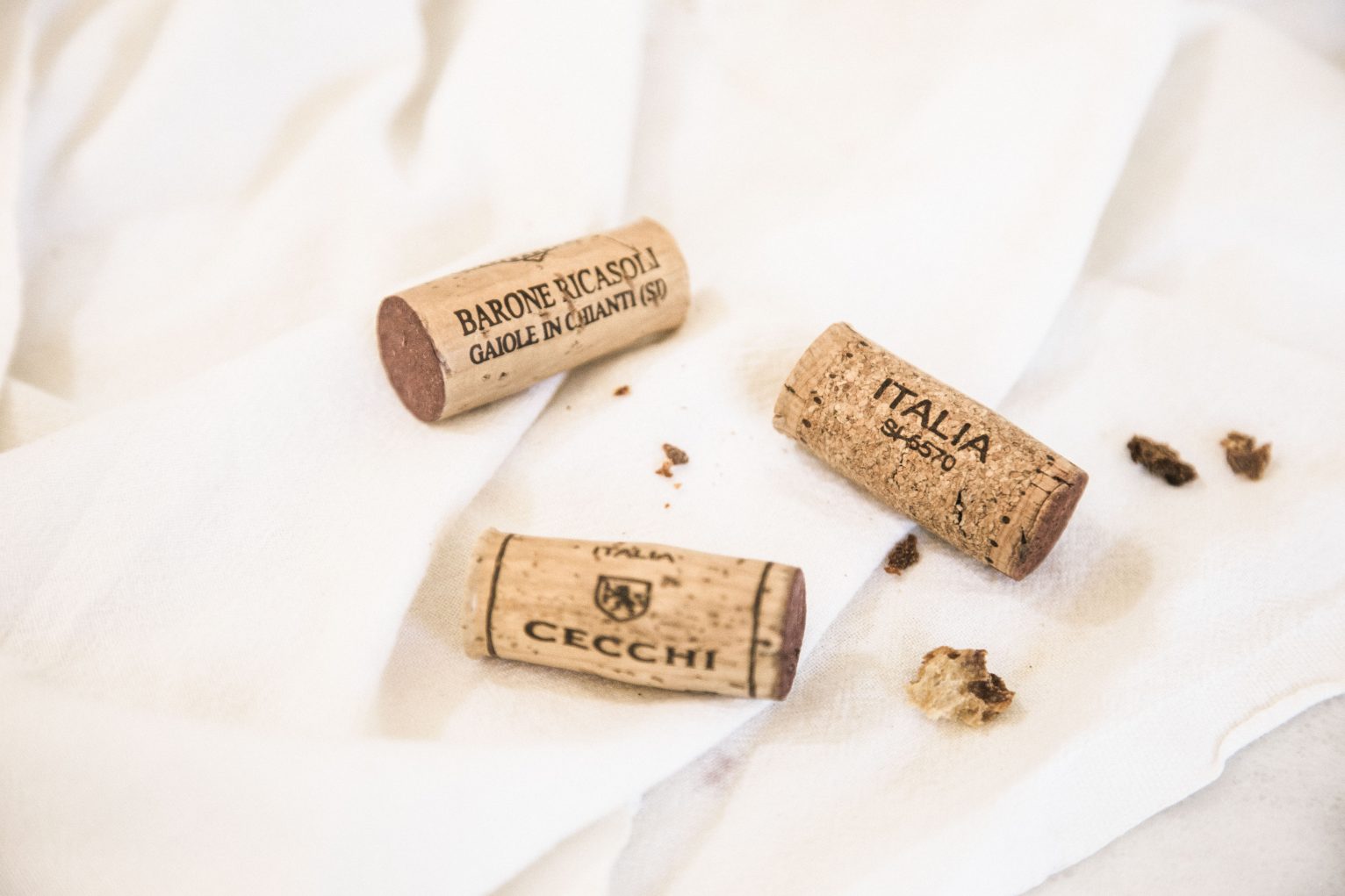 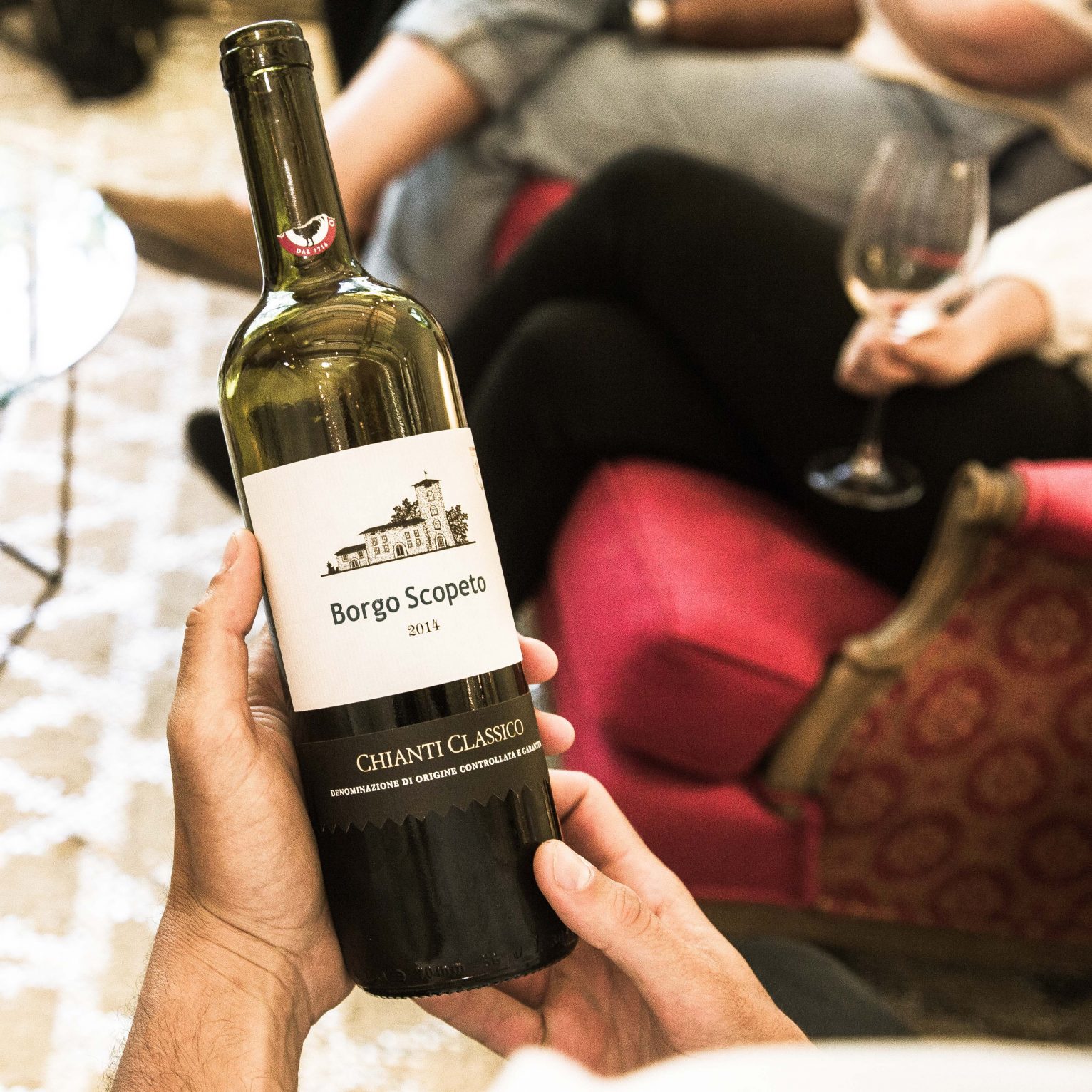 This is the perfect balance of the old-world Chianti with the modern approach to quality; how a vacation destination such as this estate can produce a $15 bottle that has nuance and character is beyond me. This was the highest-acid of the four; a few of us got strawberry and tobacco on the nose and a soft vanilla note at the end of the wine.

Out of the Chianti’s this was the favorite by far. At 90% Sangiovese it was the highest ration of Sangiovese grapes out of the three. Apparently, it’s produced “only during vintages deemed to meet the high standards,” which is a level of quality control that shines through the wine—it’s balanced, expressive, and has so much freaking character.

This was next-up after the second wine, somewhat more subdued and featured less pepper; it felt like more of a nod towards Bordeaux: smoother and had a lot of darker red fruits and subtle spiciness at the finish.

While she was working in Sonoma, Meghan and her husband Chris were living in a little house on a vineyard with a back-porch they spent time drinking cheap wine and enjoying some of the best weather California has to offer. Chris drew the labels and they made enough wine to imbibe all the guests at their wedding and have some left over. We coerced her into opening a bottle for the first time since her wedding!

This was such a fun bottle to drink; spice and cherry with leftover vanilla and clove, older wines (even those that are just 10-15 years old) are fun to drink, I don’t really have a better word for it. They’re exiting and unknown, remarkably honed or completely lost.

There’s a great deal of objectivity in wine: growing, pruning, the chemistry in properly fermenting and aging, storing and waiting. But it’s something we consume, there’s subjectivity: sourcing low-cost grapes in the foothills, stomping them with your feet, fermenting the juice, and putting it in a bottle for 14 years speaks to the whimsy behind making something for yourself and seeing it through to the finish. You only share that kind of stuff with people who are special, and that trust you won’t poison them.

Previous
All Blog Posts
Next